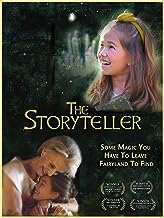 A little girl with a mysterious past affects the lives of several people in Joe Crump's family movie, drama, fantasy 'The Storyteller.'

Released Friday, September 21, 2018 with a captivating story of 1 hour and 30 minutes in length.

It is about the love of an enchanted young girl who brings wonder and healing to a broken family. On the run from her mysterious past and guided by a fairy that only she can see, Abby sparks a daisy chain of compassion, bringing joy and music back into the family.

'The Storyteller' is a powerful exploration of reality and the true meaning of family.

View the complete library of The storyteller theme.

Taglines: To Live Would Be An Awfully Big Adventure

In Joe Crump's film, which can be seen on the Hallmark Movies website (appropriately) as well as in limited theatrical release, a strange and possibly magical little girl delivers comfort to an emotionally damaged family.

The Storyteller, on the other hand, does nothing new in its Peter Pan-inspired narrative. It has an undeniable sweetness that makes it fascinating among so many energetic children's films.

Rosemary greets the youngster as if she were a family member; in fact, Rosemary views Abby as her "big sister," who has come home after a lengthy absence. As soon as Rosemary enters, Abby informs her that her favourite book is J.M.

The older woman, who is a huge fan of Barrie's Peter and Wendy, shows him an old, tattered edition. Abby's fairy companion, who also has a striking resemblance to Tinkerbell, turns out to be named April. (Spielberg won't have any sleepless nights thanks to the film's special effects).

Grandma Rosemary encourages her visiting grandchild Maggie (Samantha Colburn) to bring Abby home with her for one night until Abby's problem is resolved. Maggie, whose spouse recently died, has an adoptive teenage daughter named Jen (Cassidy Mack) who doesn't appreciate the presence of the young interloper.

The way Abby's presence affects the lives of Maggie and Jen is nothing short of amazing. In part, it's thanks to Abby's wonderful connection with a music instructor, John (James Snyder).

The characters' newfound joy is frequently expressed through songs in the film. Music plays a significant role in the plot, with characters from time to time extolling their delight. With ease, Snyder handles this particular plot requirement, with the chops seen in such Broadway musicals as Cry-Baby and If/Then.

Abby becomes frightened that she will be taken away from social services at some point and makes preparations to flee. But, yet, the film's conclusion is not sad. The Storyteller isn't a film that leaves you crying in your tub for hours.

The plot's more fantastic portions are underwritten by the director, making Crump's feature directorial debut a disappointment. The screenplay, co-written by him and Rachel Noll, is often obvious in its themes.

Those shortcomings, on the other hand, do not prevent The Storyteller from being a charming low-keyer. The show's success is due in large part to the child actors: Silzer, who despite her youth has considerable television experience (138 episodes of soap opera General Hospital are among her credits), avoids being cloying like many other children.

Even though the character is a rocker going through drug and alcohol addiction in recovery, Mack conveys both her persona's wariness and then pleasure at being able to love again with plenty of charisma.

And Towers, whose acting career dates back more than 60 years (she’s worked with the likes of John Ford and Samuel Fuller), remains a luminous screen presence at age 85.

“Everything happens for a reason,” one of the characters in this insipid feel-good film explains. It has a storyline about a family dealing with dementia and childhood trauma, Peter Pan, and everything else imaginable.

Although "The Storyteller" aspires to be a full-length Hallmark card, it only succeeds in delivering dollar-store sentimentality with its story and clichés.

A young girl named Abby (Brooklyn Rae Silzer) appears out of nowhere at a retirement home, leading an elderly Rosemary (Constance Towers) to believe she is the sibling she lost as a youngster.

Abby is taken in by Rosemary's great-granddaughter Maggie (Samantha Colburn), bringing little more than her copy of J.M. Barrie's "Peter Pan" to her new, temporary home while child services try to figure out where she came from.

Abby's carefree spirit and her love of music dissolve the tension between Maggie (Kathryn Erbe) and her angry adopted daughter Jen (Cassidy Mack).

With its competent cast and veteran filmmaker Joe Crump's narrative feature debut, Rocker is a solid effort overall. There's only so much they can do with the script written by Rachel Noll, though. The earnest drama is jam-packed with jumbled themes and concepts, yet it fails to connect.

The Storyteller suggests that if the viewer isn't inclined to clap and declare, "I believe in fairies," they should blame their cynicism. The issue lies in its own inability to weave a believable tale.